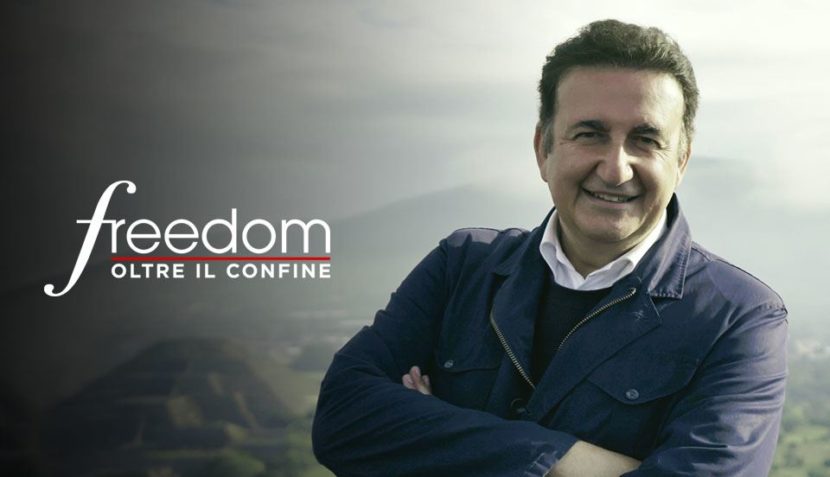 Roberto Giacobbo is back to talk about Italy with his show “Freedom oltre il confine” (Freedom across the border): the best of 2018 and 2019 seasons airing on Rete 4 while waiting to see the new episodes, but for those who have missed the past episodes, this is a good chance to satisfy their own curiosity on topics and insights so dear to our country. In addition to content, what is so special about that show? It is inclusive, it uses our font so that each viewer can clearly and easily read any information. The TV show will restart on Italia 1 next September.

A boy grown up, six feet tall, trying to keep the desire to have fun always alive.

Freedom is his latest work. How was the show born?

I wanted to change my life. I did that over and over. I did it when I was a student and decided to start doing the radio speaker, when I left the radio – I had been working in RDS for 14 years- to become a TV writer, writing lots of shows in collaboration with leading professionals. One day my first book came in third place into the bestsellers list of the Egyptian books and I was called by Telemontecarlo (now La7) which asked me to make a show to spread the knowledge of Egypt. I thought like an author. Lillo Tombolini was on the phone and Stargate – Linea di Confine (Stargate – Boundary line) was born in 1999. I will never forget: that was me presenting the television show.

What is your target audience?

Our target audience is anybody. The show is addressed to those who love to find out what is hidden under the surface. It is for the Nobel Prizes and for those who have not had the chance to study. It is for both children and grandparents, from 4 to 100. The show is full of captions and images, easy to understand and strongly communicative, and implications intentionally not described in depth, which encourage the viewer to deepen, keeping his attention and curiosity alive.

You brought the first drone into the Milan Cathedral, how did you do that?

We can guarantee professionalism. Not everyone can bring a drone into the Duomo, so it is right to leave these things to those who know how to manage them. Another trait those who work with me and I have is a large output of ideas we keep secret until the airing. We focus on really original things. We unintentionally are a source of ideas for others as well. We work with passion and respect for what we do, for human relationships, for fairness and for places. All the respect we have for people is due to this. It is the success of institutions and individuals; the show involves people helping us, sometimes we deal with topics suggested by research done by men who have been studying that topic all their lives and we got 20 minutes to do it.

Sources. Speaking of technology… how can you not get addicted to it?

For us they are topics which are part of the work; I was born author, if I write I check the sources. It is a slippery slope, which requires a lot of experience. To be able of making a comparison in your memory and experience, you must have seen so many different versions of the same news. You must have the courage to read, to make any comparison among several sources. In schools I explain the techniques of forgers to tell things that are untrue. If you can recognize things, you can save yourself.

Technology is a child of the IBM engineer who designed the first talking computer in 1959. We used to talk about technology in my house, with my father who referred to computers as calculators. Technology has two sides: or you know it and you own it, or else you are a slave to it and have to pretend it did not exist. The latest technology transferred to the camera crew which works shoulder to shoulder with me in the caves, keeping a cinema quality with the agility of a documentary, has been a step forward.

Yours is an easily readable show thanks to EasyReading font. Where did this need come from?

Disclosure is a public service which should not have owners. No matter what network it is on, in the same way as the viewer doesn’t care which button on the remote control he has to press. Disclosure is not meant for a niche; it is for everyone. That is why, in order to be accessible in the best way by anyone, we have also thought about dyslexic users. The same thing was done for those who have to read. I wore glasses, then I decided to get operated. However, I did not forget that I wore glasses and I asked Mondadori to layout my books with a bigger font, to ease people.

I realized that one of my daughters was late with subtitles in all of this. In primary school, she had nine teachers a year and no one had ever noticed she was dyslexic. She got good grades and six kids failed her class in sixth grade. She did not flunk, but they realized she was dyslexic and she began a very important work, catching up on all the years lost in primary school. It was not easy to notice because her talents were accentuated by teachers. Our family had never had any case of dyslexia and we helped her by starting her on a journey made of books and listening.

How did you happen to choose EasyReading font?

Dyslexics read three syllables instead of six per second; not everyone knows that. This problem has been raised in Rai years ago when one of my Voyager advertising campaigns with images and texts created problems for the visually impaired and for those who struggled to read. When I reached Mediaset, the manager Mirko Pajè showed me the font and I wanted it immediately. A font like EasyReading to be used for all texts is what I had had in mind for years.

How has the television world changed in the last decade since your debut in 1997?

It has changed so much. In terms of time, first of all. A broadcasting service lasted 2 minutes, now only 30 seconds on average. That is a rule which, of course, may change according to the service, for instance during election time durations are different. Communication has changed. The intensity of the image and information has changed and the work has increased. In Freedom there are 34 people, including a crew of 14 and 9 cameras in 4K always on, shooting everything, with a camera which lives only for details.

Have distances really been shortened by web and social media?

You opened two beautiful fronts. The indicators are 99% positive on social media, we unleash what we are, the desire to do good things, to look for good news. On the other hand, there is a lot of brutality which goes unpunished; everyone feels entitled to say things they would not say, abusive and unfair. As always, balance is needed; the true achievement is not to jump one way or the other. We can handle these imbalances by jumping forward and not falling, handling an imbalance. No one can hide his identity on the web. Once one of our guests, a member of the financial police, was attacked by one of them. Impunity does not exist.

What is the difficulty of disseminating science today?

The dissemination work should be deepening mixed with fun, to make sure not to lose people’s attention. The hardest part for the success of the episode is precisely to win the trust of the viewer and make sure that his curiosity does not fade during the program. For us who make it, it means never stop studying and teamworking, because subjects are complex. My show starts at 21:20 and ends at midnight and we don’t deal with popular topics, such as football or music; there are no heated debates which ignite the masses. For this reason, it is quite difficult to keep, in every edition, the thirst of the viewer for deepening alive, be it a child or a centenarian. Furthermore, we must face a very rich palimpsest, with reality shows and fictions having a sensible budget and we have to be as attractive as they are, even more, in order to compete. There are very few scientific communicators, if we were to count them on our fingers, some fingers would be left over. They should be preserved, like pandas.

Journalist, television personality, television author, documentary filmmaker, writer, university professor: so multi-faceted that you can to reach the most different targets using every possible linguistic style, always being challenging. What is your “formula”?

The formula is normality; the star or the master or the despot do not enter, a colleague, a student or a child – even if in the body of an adult – do.