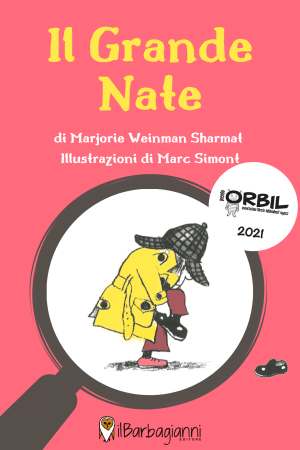 The crime series written by Marjorie Weinman Sharmat and illustrated by Marc Simont, which, through its mysteries to be solved, brought generations of children closer to reading in the USA where it sold 15 million copies, was published in EasyReading® Dyslexia Friendly with the translation entrusted to Laura Bernaschi. Waiting for the fifth summer release and the sixth autumn one, four episodes have been published so far, three of them – Il Grande Nate, Il Grande Nate e la falsa pista, Il Grande Nate e la lista smarrita (The Great Nate, The Great Nate and the false trail, The Great Nate and the lost list) – already released before the Prize.

The ceremony took place in a live Facebook where the series was awarded for the following motivation: “Nate is a character who does not slip through the cracks in the contemporary publishing scenery. It is pretty much impossible not to growing fond of his wit, his curiosity, his courage in facing the small big challenges of everyday life. Whether it is a missing drawing or a shopping list, Nate never backs down. He wears the detective’s shoes and, with a quick wit, tries to help his friends”.

The pleasure of the publisher Jacopo Saraceni is huge: “This award is giving us great satisfaction, especially for its source. Nobody better than independent booksellers knows the readers’ needs and tastes and is able to evaluate, beyond the topic, the potentials of a book. Our gratitude goes to Alir and the independent booksellers who have loved Nate and supported us”.

The choice of using EasyReading font has been very important in the awarding of the Prize. “The font was decisive, since the series dates back to 70s, in making it more accessible but also modern. The publishing house itself has adopted the font also for the other “works for children where the element of reading is essential”, obtaining a great feedback “also in areas of consultancy and collaboration, where the proposal to use it has always been accepted by companies”. In the near and long-term future, at the start of each project, a box for EasyReading is always open.