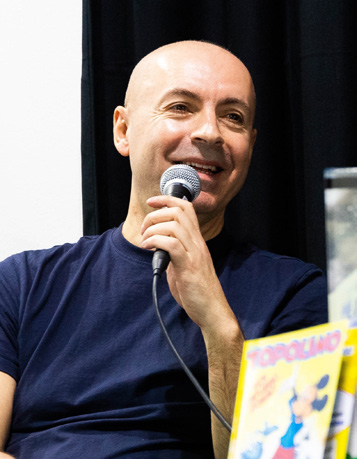 It was 11 April last year when the most popular weekly comic ever, Topolino, made its debut with new content and graphics. The changes were made with high readability in mind, the managers choosing to rely on the inclusive font EasyReading for the text. The picture was clear. They were getting ready to face the latest challenge: entertain and surprise the “mobile-born”, even at school.

Thanks to the comic’s stories and communicative power, the weekly has always presented itself as a means of fun and escape, promoting positive, educational values. The new “high readability” recipe is based on a novel mix of comic book entertainment and a focus on current events, which is supported by the introduction of the new font, EasyReading, created to encourage dyslexic children in their reading and to facilitate that of all readers.

What has changed in a year? The managing editor. In October 2018, Alex Bertani, former Italian market director for Panini Comics, took over from Valentina De Poli. We also interviewed him in order to understand why he chose to uphold the decision to use EasyReading within Topolino’s pages.

You’ve had many roles at Panini…when it was founded (1994) Marvel Italia still existed. Let’s review these nearly 25 years?

“It’s really tough. You can’t summarise 25 years in a few words. Being able to turn a passion into a job has certainly been a great privilege; I hope that I’ve succeeded in giving the world of comics even a small fraction of what I’ve received.”

How has the publishing world changed?

“Rather than changed, I would say overturned. Like the whole entertainment world, in fact. The advent of new (digital) media and new channels of communication (the Web) have influenced everything: ways of producing, communicating, and distributing content.”

How has it been stepping into the shoes of Topolino’s editor?

“A big responsibility, it’s frightening facing up to such an important world, one that is so deeply rooted in everyone’s imagination and so closely followed and loved. We’re talking about what is, by now, a contemporary classic but also the source of a lot of pride at the same time.”

On 3 April 2019, issue 3306 of Topolino, dedicated to 70 years of the weekly, arrived in bookstores. The first issue, in booklet format, was published by Mondadori on 7 April 1949. What endures of that first issue?

“A lot. The idea of creating a means of entertainment, but also of informing, and one aimed above all at younger readers. A publication capable of making you dream and of telling you about the real world at the same time. It’s a winning combination, then, and one that today – 70 years later – continues to satisfy a wide audience, and this despite the fact that in the meantime the means, the language, and, let’s not forget, even the readers, have changed.”

Topolino is the most read magazine for children from 5 to 13 years old. It always has been. So, how do you do it? What’s your secret?

“A lot of work – our editing work, combined with the talent of a comic school that is among the best in the world, and which has been able to make a name for itself even internationally with the highest standards of excellence.”

Topolino is a ‘classic’. What does a classic do to keep up with the times?

“It evolves, looks for new paths, observes how the world is changing around it, and proposes new modes of language, entertainment, and escapism.”

The Magazine has become highly readable thanks to EasyReading. Where does the need for this arise from?

“From the desire to meet all our readers, even those with a little more difficulty in reading. Let’s not forget that Topolino has taught whole generations to read, or at least to improve their reading skills. With this innovation, we have tried even harder to fulfil this important role.”

How can printed paper ally itself, even if it’s possible, with technology?

“Topolino creates stories. New technologies, new media, new methods of reaching the public will always need a lot of content with which to fill their formats, seeking to offer the public the highest possible quality. Perhaps, one day, this will be the way to do it.”

Have internet and the social networks actually shortened the distances?

“Yes, a lot, today communication, and even interaction with readers, can almost happen in real time. All this exposes you more, and it’s also more tiring, but it also represents an incredible opportunity for having direct feedback on your work.”

What is your reference target?

“A good question. Well, let’s say that Topolino is definitely aimed, above all, at an audience of between 5 and 12 years old, the age at which you learn how to and start to read. It’s here, especially, that Topolino has always performed an amazing, educational role in improving children’s communication skills, in developing a strong critical sense in them and a curiosity that can draw them to many different topics, which often then become passions. But it’s undeniable that a good part of our readers are adults who still manage to find the same magic in the magazine’s pages that they did when they were children. Our comic book stories often have two levels of reading, one that is more humorous and direct for a younger audience, and one that is, instead, more structured and complex, capable – at times – of treating important themes and problems.”

You have always been promoters of positive, educational values. But seeing how things go in the world and at school, it is not always easy. Where do you start from, when choosing the issues to deal with?

“Often, they are ideas taken straight from the newspaper. Topolino has always been an effective witness of its own time. On other occasions, it is the sensitivity and talent of our writers, who manage to bring educational and informative themes into the stories too.”

“Where did you read that – in Topolino?!“: so, when Italians use this expression to suggest scepticism and mock their interlocutor, how do you explain to whomever you’re talking to the entertainment, educational and informative value of the publication you edit?

“I’m repeating myself a bit, but, again, this magazine has been able, over time, to inform and to become an important educational means for whole generations, but, above all, to do all this using an “easy” and fun language – not a scholarly one – that is also adapted to a younger audience. I believe that this formula is at the heart of the great success and longevity of this magazine.”