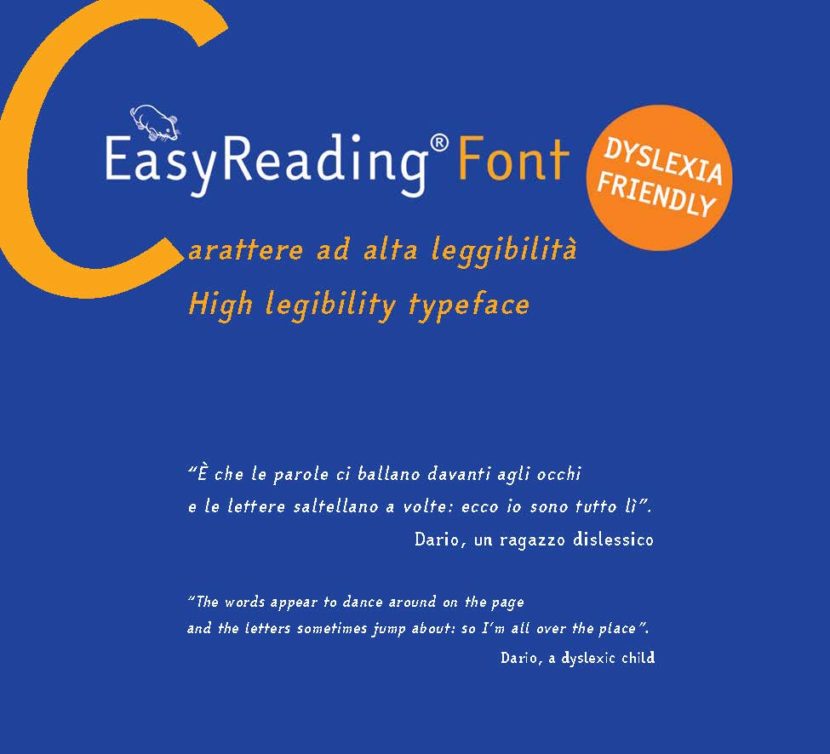 “We made a good job of it. And now we’re giving it to you for free”: these are the words that EasyReading Multimedia used to communicate the decision to make the Font even more accessible, giving a free license to ordinary people who discover dyslexia but also to those who want to read and be read with “clarity”.

EasyReading was implemented with a Design for All methodological approach for which diversity is conceived not as a problem but as a facilitating “value”. The specific difficulties of dyslexic readers have become an opportunity for creating a high legibility font for everyone.

EasyReading currently supports all languages that use the following alphabets: Latin, Cyrillic, Greek and Coptic (including ancient Greek characters and musical notations).

According to the latest estimates, dyslexia currently affects at least 10% of the world’s population, i.e. approx. 700 million people. This explains the reason for such an effort in giving life to a font that is for everyone. And also today’s decision to make the download of the Font free of charge, by accessing it directly from the website www.easyreading.it on the dedicated page (Free private user license for personal and non-commercial purposes only).

“Knowledge is not an end in itself. Knowledge must be shared” says Federico Alfonsetti, designer of the Font and CEO of the Company. These are the terms he uses when speaking of EasyReading, his brainchild stemming from a decade of studies, carried out with a team of researchers who ensured that, firstly, everything had a form and, subsequently, that an independent scientific research certified that: “…the results, which appear significant from both the statistical as well as clinical point of view, allow us to affirm that EasyReading can be considered a valid compensatory tool for readers with dyslexia and a facilitating font for all categories of readers. I firmly believe that a good design can be recognised by its pithiness – continues Federico Alfonsetti -, by the impossibility of removing or adding anything else from or to it.

I have always been committed to these principles while creating the Font, and now that we are also in a position to provide it free of charge, I feel that I have achieved a personal goal. In addition to having created something able to actually help readers with difficulties, there was first the awareness of having put on the market something that was a facilitator for everyone and then the awareness of being able to make its circulation free, worldwide, for all those private citizens who want to use EasyReading. For someone who does my job, I don’t think there is any greater satisfaction. Leaving an inheritance, a sign, a drawing in this case, that goes beyond time”.

“Reading is a right. Of everyone”. These are the words, addressed not only to those who are dyslexic, with which Marco Canali, the person who believed in the Font long before the scientific studies did, speaks of the decision to “liberalise” the font in a certain sense. Canali explains the rationale for this decision. “My world consists of numbers, investments and economically viable projects. Needless to say, the decision to give years of work for free has nothing to do with a business plan. There are ideas, however, that deserve to be “free”. This category includes EasyReading: I realised how many dyslexics there are worldwide (statistically almost 1 in 10), and how many we actually have around us or know, without even realising it. And then I think about those who live in front of a computer, who read most of their time.

I think about how EasyReading can really help anyone not to put a strain on that which allows us to see the world: our eyes. We won’t get another pair. That’s why I make it an ethical rather than an economic issue. When the idea shared with the rest of the team of making the Font free of charge was put forward, I felt the weight of the social commitment even more strongly. The rest is history that we will write together”.

“Breaking down diversities. There are many types of them, but that concerning difficulty in reading is a subtle diversity. Often it is not immediately identified and those who suffer from it are branded as incapable, tired and listless. It is terrible to have to use all one’s energy to read a few pages, and not see one’s own effort recognised, or perhaps not even realise it. I think that actively promoting breaking down this barrier is an act of solidarity towards everyone that fills us with pride” says Uberto Cardellini, economic consultant of the Company, actively engaged in the internationalisation of EasyReading, as well as the true bonder of the team.

Reading has never been so easy.

Reading is finally for everyone.