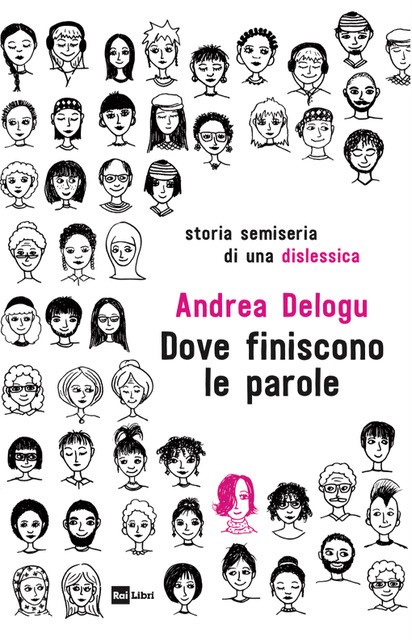 Andrea Delogu’s story of dyslexia, published by Rai Libri, is printed in EasyReading

Andrea Delogu is one of the most popular television and radio hosts of recent years. She has hosted the Rai television programmes “Indietro tutta! 30 e l’ode” and “Guarda…Stupisci” with Renzo Arbore and Nino Frassica, and has been at the helm of “Stracult” for five years with Marco Giusti and Fabrizio Biggio. Every afternoon, she hosts “La versione delle 2” on Rai’s Radio 2 and now she’s back in book shops with her latest effort: “Where words end. The half-serious story of a woman with dyslexia“. The book is both testimony and therapy, the story of a journey and of all its different stages. Andrea Delogu recounts, with vivacious intelligence and profound sincerity, her life with dyslexia in a country where dyslexia is still, for many, an unknown disorder. And she does so using the inclusive font, EasyReading.

On page 10 of the prologue, she gives us a summary of what we will find in the book: “Ah, the font this book is printed in is very readable, adapted both to people with dyslexia and to those without dyslexia. It’s still a written text, I know, and for some it will be the biggest enemy on the face of the planet, but it’s my job to try to make it as easy as possible for you. If you don’t manage to finish all of it, don’t lose hope, I’ll sum up the gist of it for you: even if you suffer from a specific learning disability, you are awesome and the world is open to you. Don’t give up, carry on with your head held high, and don’t believe those who try to make you feel wrong. You aren’t.“. 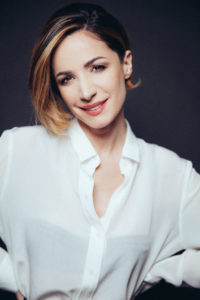 “A young woman of 37 years who has to remember how old she is every morning…instinctively, I feel like a kid.“

“Where words end” is the title of your latest book. What’s in it?

“Three years ago I did a TEDx talk in Caserta on dyslexia. It was a subject I felt I could discuss, being dyslexic, and I thought it could be interesting to talk about it. Well, from that day onwards, I haven’t stopped receiving letters, emails, and text messages from kids, parents, and teachers who deal with kids with learning disabilities. We are still so behind on this issue; we think it is a problem. But how can time have stood still? When Rai Libri suggested that I write a second novel one day, I knew that my problem with words would be the only inspiration I would want to explore at this point in my life.”

“I’m dyslexic, I don’t know what it’s like not to be dyslexic, so I can only explain to you how I see things. The time comes when you are exhausted. They keep telling you that you’re intelligent but that you don’t apply yourself, and you sit there asking why they’re such liars, because I applied myself with all my strength. The problem belongs to those who have to help you understand things, not to you. We have to approach every single child with compensatory strategies, in different, differentiated ways, and those with dyslexia have to have a lot of guts, because they have to put the need to feel like everyone else to one side in order to demand respect, including, and especially, for their own pace.”

How do you explain to teachers that it isn’t a problem of not wanting to apply oneself but that it is a learning disorder?

“We have to talk, always. Teachers are people like us, who read newspapers, watch TV, listen to the radio. They’re humans in the end. Public opinion has to tackle the issue of dyslexia without any shyness, and I hope that my book creates a ripple effect in terms of people’s testimonies, and that the subject of dyslexia is treated normally.”

In the book, you talk about dyslexia as though it were an opportunity. In what way?

“I discovered that I was dyslexic when I was 26. Until that day, I felt “worn out”, I had the impulse to learn, I wanted to read, but I just couldn’t do it – I would get too tired, I wouldn’t understand why other people were faster than me. When I understood that it wasn’t my fault, a new world opened up before me. I gave myself more opportunity, I started to keep up and colours suddenly became brighter. I found myself.“

Central to the book is a very clear theme: sharing. What does it mean for you?

“It’s fundamental; it allows you to overcome difficult times thanks to those around you. I’m talking about friends, parents, classmates, teachers. The book is written from a positive perspective – I’m not fighting anyone. If anything, I’m encouraging listening.“

Your book uses an inclusive font, EasyReading. How did you end up using this typeface?

“I talked about it on the radio a while ago, having learned about the font in an article I read in the newspaper. The news appeared before my eyes and it stuck in my head. For me, it was like randomly finding a seed ready to be sown. I knew that the next book I’d write would be in that font, that was the right typeface. After all, am I dyslexic or not?! EasyReading helps dyslexic people to read, so why should I use any other typeface? And so, when they called me at Rai Libri, I asked them, over the first coffee, if it was possible to use it and they immediately said yes.”

It’s also the font used for Mickey Mouse…a magazine that’s very much to your taste. Isn’t it?

“Mickey Mouse is the protagonist of one of my book’s chapters; he has been my super-hero since forever. As a little girl, I learned not to lose hope by reading his adventures. All kinds of things happened to him, but, with his quiet little voice, he was always good at getting up again. He managed to transform every disaster into something inclusive, and so reach a happy ending. As a child, it was a struggle to read Mickey Mouse, after school, after my homework, but I never let anything or anyone stop me from following my super-hero. That’s why when I learned that Mickey Mouse Magazine also used EasyReading, it seemed like it was all coming together for me.”

You’ve always worked in the entertainment world; has dyslexia never been an obstacle for you in any way?

“No, quite the opposite, it has given me the chance to be considered. I was different: my approach was fresh, modern, I would think outside the box, I wouldn’t learn scripts, I wouldn’t read teleprompters, I would improvise and I would manage with the tools I had, I would go by instinct. Mine was TV inspired by Arbore and it’s no coincidence that he is my great mentor: in later years, I had the good luck of working with him and in this case too I had the sensation that, in the end, everything was making sense.”

“Francesco has an excellent memory. He reads 40-50 pages of script and the next day he has it memorised. He told me that he would train me, thinking in terms of the concepts. It’s a challenge that appeals to him.”

Let’s talk about today. The Web, internet, social media – they’re all your allies and yet they are also so insidious. How do you survive? How do you recognise the dangers?

“When something is dark, I get rid of it. If you insult me or take a swipe at me, I block you. I don’t give anyone the chance to hurt me. The Web is the world and the world is amazing. The Web has helped me a lot and I won’t give it up because of a few people’s nastiness.”

You’ve told your whole story in novels and not just novels. What form does courage take?

“Courage has a lot of guts, I don’t know exactly what form it takes, but it’s that kind of thing!”

You are the living proof that there’s life after war. How do you manage it? How have you managed it?

“Thanks to my parents who made me see that you can always get up again. And thanks to my friends, too, life companions.”

Turin International Book Fair. Will we see you on stage?

“Yes, absolutely, I’m presenting my book on the 12th of May at the Rai Libri stand, at midday, give or take a minute. I’ll be waiting for you!”

What flavour does happiness have?

“It has the flavour of my husband’s attempt to prepare crumbed cutlets when I come home, happy but tired, after a day at work. What do I cook? Fatty things from Romagna…he does a great job!”

First the Fabrizio Frizzi prize just established, then, in the Italian Senate, you received the honour of the symbolic bell from President Elisabetta Casellati. It seems that we have a lot to learn from you. What projects do you have in store for the future? 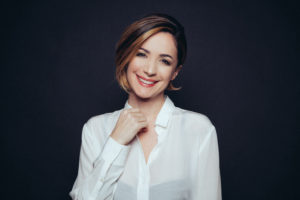 “Are you crazy…I don’t have the faintest idea. Television projects are coming together now; in terms of life projects, I plan on giving my husband the chance to train me.”