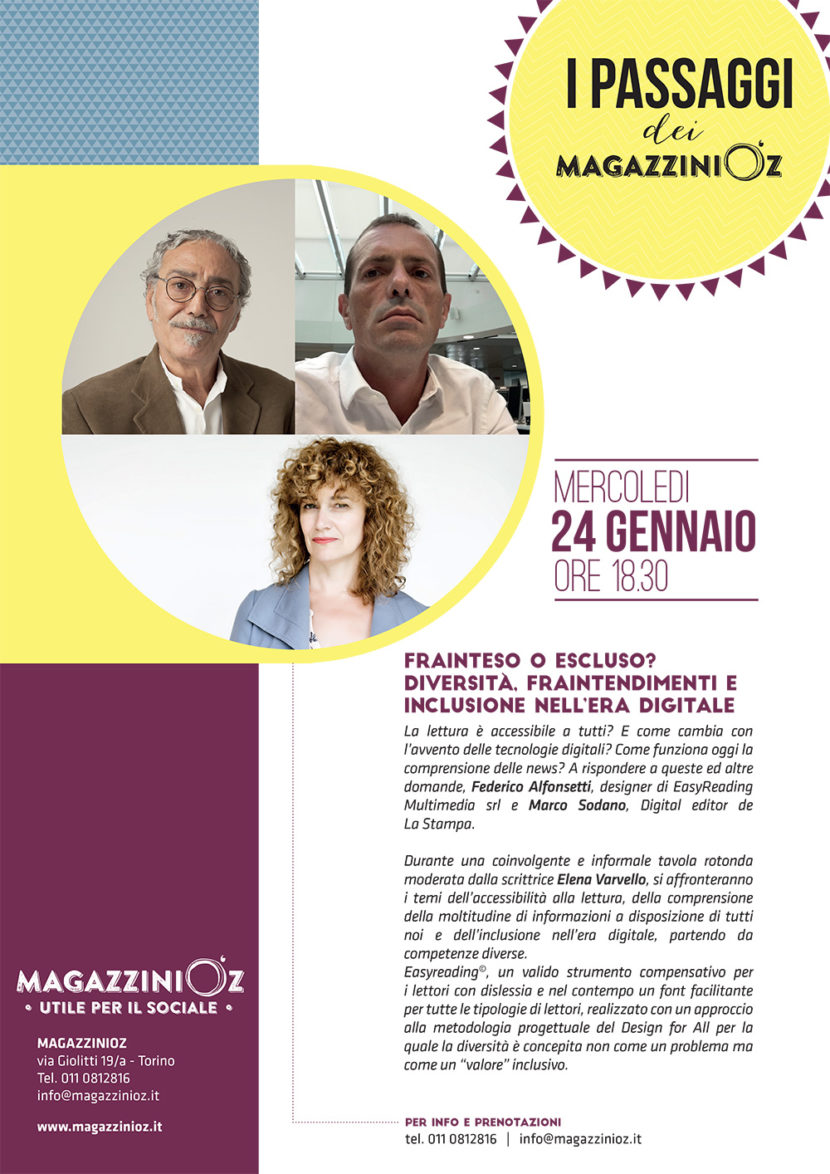 Federico Alfonsetti, CEO of EasyReading Multimedia srl and Marco Sodano, Digital Editor of La Stampa, together for the first event of the year dedicated to “Passages”, the format of meetings open to the public which every month, at MagazziniOz, proposes stories of life and of people that tell of challenges, possibilities and new perspectives, to see and understand that a new way of understanding and living the social dimension is possible.

Is reading accessible to everyone? And how does it change with the advent of digital technologies? How does the understanding of news work today? Answering these and other questions are Federico Alfonsetti, CEO of EasyReading Multimedia srl and Marco Sodano, Digital Editor of La Stampa. Bringing them together is “Passages”, the format created and hosted by MagazziniOz, a cooperative created by CasaOz, which proposes stories of life and of people that tell of challenges, possibilities and new perspectives, to see and understand that a new way of understanding and living the social dimension is possible.
Wednesday 24 January, at 6.30 pm – during an engaging and informal round table moderated by the writer Elena Varvello, the issues of accessibility to reading, understanding the multitude of information available to all of us and inclusion in the digital age, starting from different skills, will be addressed.
Those of a designer, Federico Alfonsetti, a passion for fonts, which in 2009 gave birth to Easyreading©, a valid compensatory tool for readers with dyslexia and at the same time a facilitating font for all types of readers, implemented with a Design for All methodological approach for which diversity is conceived not as a problem but as an inclusive “value”. A font also adopted by CasaOz for its website, renewed on the occasion of its tenth anniversary, driven by the will of the non-profit organisation to be always accessible to everyone and of the work of inclusion that it has always been engaged in.
And those of a journalist, Marco Sodano, a passion for economics, responsible for the digital editions of La Stampa, who will speak about the heart of journalists’ job: the challenge of misunderstanding, not in terms of an error, but as a natural consequence of being different from everyone else, because misunderstanding, reading what was not the intent of who was writing, can be a great opportunity for growth.

Elena Varvello | Italian writer, teacher
Born in Turin in 1971. His collection of stories “L’economia delle cose” (The economy of things) (Fandango, 2007), candidate for the Strega Prize and finalist of the Berto Prize and the Carlo Cocito Prize, she has won the Settembrini Prize and the Bagutta Opera Prima Prize. She has published the novels “La luce perfetta del giorno” (The perfect light of day) (Fandango, 2011) and “La fine del mondo” (The end of the world) (Loescher, 2013). His latest novel “La vita felice” (Happy life) (Einaudi, 2016), published in England, Spain and France, will be released in Poland, Portugal, Greece and the United States. She teaches Storytelling at the Holden School of Turin.

Speakers at the event

Federico Alfonsetti Designer, Chairman and CEO of EasyReading Multimedia srl
Born in Turin in 1953, a life in printing, first as a graphic designer and then as a publisher. His passion for fonts – which were then drawn by hand – was born in 1969 by attending “advertising poster” school. In 2009, as a partner of a Turin publishing house, he developed the EasyReading© font, specifically dedicated to dyslexic readers. An “inclusive” project that was created almost immediately with the aim of bringing high legibility to everyone. The font has won numerous awards in the both Design and Scientific fields. In 2014 he co-founded EasyReading Multimedia srl of which he is Chief Executive Officer.
Marco Sodano | Digital Editor of La Stampa, Journalist
He is responsible for the digital editions of La Stampa. Born in Turin in 1969, he has been working in newspapers since 1990. He has a great passion for economics (he led La Stampa’s economics editorial board for five years). The current challenge is the construction of the digital newspaper: the internet has devoured information before it was able to metabolise the network and the new languages needed to use it to the best.

A cooperative conceived and implemented by the non-profit organisation CasaOz to promote and support the social project and service it offers to sick children and their families. MagazziniOz, through the professional training and employment of young people with disabilities or suffering from chronic diseases, was also founded to develop the path undertaken by CasaOz, bringing to the city centre the integration and normality experiences that animate it, and to design with companies, dedicating ample space for initiatives to investigate social innovation. The proceeds and activities of MagazziniOz support, promote and help CasaOz projects and initiatives.