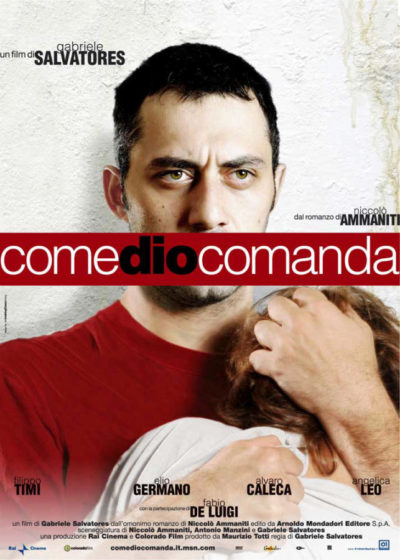 The movie ‘Come Dio Comanda’ (As God Commands) by Gabriele Salvatores will finally be accessible to everyone and the subtitles will be written in EasyReading, the highly readable Dyslexia Friendly font
Appointment, on Saturday May 6th, in Turin, at the Cinema Massimo (Via Verdi) in Theatre 3 at 10.30 am with the movie projection (free entry until seats last).
The projection is the result of the second edition of the Audiovisual Accessibility Training Course, curated by Prof. María Valero Gisbert, Chairman of the Master’s Degree in Audiovisual Translation (MTAV) of the University of Parma and created with the contribution of the Compagnia di Sanpaolo.
The film was made accessible by students who participated in part of the training course, and completed the Master in Specialized Translation for Adaptation and Subtitling of the Training Agency Tuttoeuropa for academic year 2016-2017. At the end of the projection the course certificates will be delivered to the 27 students enrolled.

Our thanks go to the valuable collaboration of Gabriele Salvatores, Colorado Film, Rai Cinema and 01 Distribution. The accessibility was supervised and mounted by Sub-Ti Access. The subtitling is made with EasyReading, the Highly Readable Font.

The plot of ‘Come Dio Comanda’. The story is set in Varrano, an imaginary village of a heavily industrialized northern Italy, where fields and forests alternate with warehouses, orbital roads and shopping malls. The narration revolves around Rino and Cristiano Zena, a father and a boy of thirteen, abandoned by Cristiano’s mother shortly after his birth. Rino is a thirty-six-year-old, he drinks, he is violent, and he lives by his wits; however, he has a strong bond with Cristiano and is obsessed with the fear of losing him, hunted down by social worker Beppe Trecca. Cristiano deeply loves his father too: he is the most important reference point for him and entrusts him completely, albeit accepting his defects. Their only friends are Danilo Aprea and Corrado Rumitz, known as Quattro Formaggi (Four Cheeses) …
An extraordinary performance by Timi, Germano and De Luigi. The film won two David of Donatello for best photography (Italo Petriccione) and for best digital visual effects (EDI).