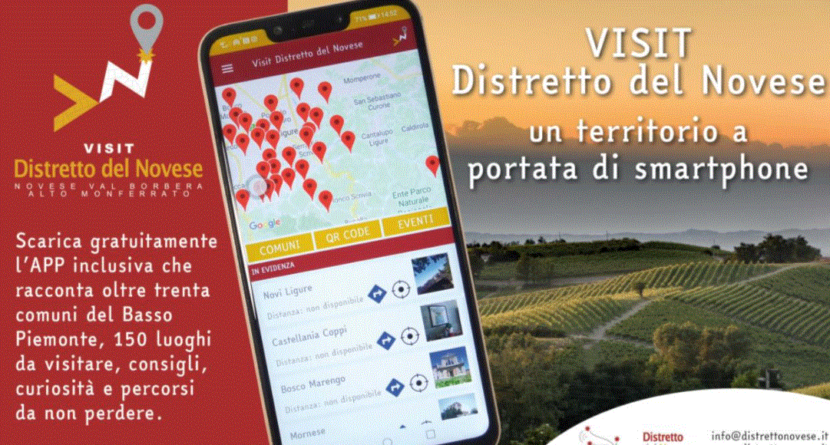 During the digital price-giving of Piemonte Innovazione 2020 – the award promoted by Anci Piemonte now in its fourth edition – the project Visit Distretto del Novese reached the third place. “We always enter a competition in order to win, but we didn’t expect to get so high” the contact person Barbara Gramolotti said. “Although we were aware of our project strength and longed for the podium, predicting such a position was difficult, so much that the Mayor of Novi Ligure and President of the Distretto del Novese, Gian Paolo Cabella, was pleasantly surprised by the news”. The initiative, one of over 50 presented on the occasion, is an inclusive virtual assistant which allows tourist navigation of 150 places located in 33 municipalities in the area of Novese, Val Borbera and Alto Monferrato.

“Novese District was born in 2008 and a couple of years later organized itself as affiliation of municipalities. Visit Distretto del Novese was born instead at the end of 2019 as a need of increasing the touristic offer. The project was created in 2020 with the intention of making discovered an unexplored territory, from a touristic point of view, by everyone without distinction”.

An app was then designed, downloadable from App Store e Play Store, which aims to entice (virtually) people to visit (physically) the places, where there will be educational external and internal paths, in correspondence with paths, museums, ecc… In the name of the accessibility, indeed, the choice to implement the Google Voice System to tell places to those who have difficulty in view, Arianna tool, to facilitate the web surfing of paths to those visually impaired, and Easyreading font, to allow an easy reading to dyslexics. “We chose to use the font we already adopted for our website at the end of 2019, for our app, billboards and flyers. When we started Visit Distretto del Novese, we wished to develop an inclusive project which was, from a graphic point of view, engaging even for non-dyslexics. This is the reason why we have chosen EasyReading”. Inclusiveness and the idea of networking were undoubtedly the two strengths which justified the outcome of the project, which want to grow further. “The prize of € 3,500 we obtained will be invested to grow again, with the inclusion of historic shops, which represent our local enogastronomic souvenir”.