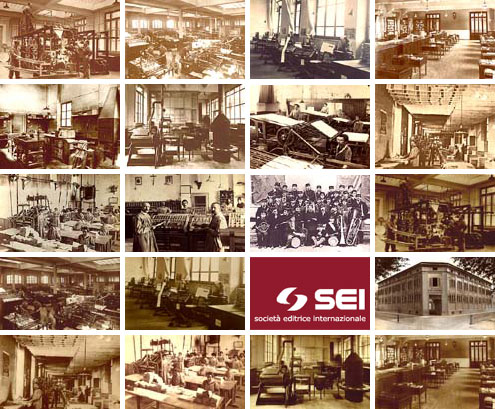 Sei Editrice was founded in Turin in 1859, and in 1908 is was officially established as a company. The publishing house, amongst the first in Italy to embrace educational multimedia, is the cultural expression of the Salesian Congregation with a precise educational mission to develop a critical, aesthetic and moral sense in boys and a cultural function. It moves across different areas: textbooks, miscellanea and multimedia and over the past few years it has chosen to use the EasyReading inclusive font for textbooks intended for primary and secondary school classes. The MD Ulisse Jacomuzzi, who’s been in Sei Editrice since 2000, welcomes us into his office.

Your year of foundation dates back to 1908, almost 110 years ago. How has the way books are published changed?

It has changed profoundly, especially given the acceleration of digital in recent years. I am still convinced that book technology is somewhat perfect because that is what a book is, not just a simple product. The timing has changed for school textbook publishing too, we live a continuous need to innovate publications with the latest news and discoveries. Previously, works lasted 20 years; now, they are obsolete after 4 years.

Is all this a good thing or a bad thing?

A bad thing, but not entirely, time should be given for the works to spread and to settle. There are texts that for 40 years have been perceived as troves of knowledge, think of Abbagnano, the most widespread text in philosophy classes. Education today requires that the works be re-edited, this is what innovation calls for, with more or less useful tips, every academic year.

You are one of the main Italian school textbook publishing houses: when one thinks of a book for children where does one begin from?

From a project, from an authorial idea or from an idea that is born in the publishing house itself. In recent years the publishing rate of works has increased: ever more frequently the authors introduce their project and the publishing house intervenes before print just to add those educational novelties that the author often does not include. The idea must take competition into account, it entails market testing and a search around poorly known grounds, in order to allow the opening of new paths and then the publication of new books. Some years ago, we published a history book that had a huge success, do you know why? Because it highlighted something we do not, quite a paradox, usually find in history books: stories, like those on conflicts of interest. If the idea is good, it sticks.

How many new projects see the light every year?

Approximately 15 new works, some are re-editions, but at least a third are original works, sometimes by grass-root writers, others are second thoughts, or even new proposals by established authors.

Knowledge in time is your claim. Can you explain better?

It is a clear hint at the publishing house’s turn of a century, and to its presence on the publishing market with a constantly attentive scope on education. And then we hope it bodes well for yet another 100 years, to look back at the past, while walking toward the future.

Amongst your goals you also want to develop in readers, a healthy sense of critic, aesthetic and moral. All this now seems to have been lost along the way. How much of this caused by the new ways of understanding communication, and so by internet, and how much is caused by a board of teachers that is often not up to date even with its pupils?

There is a big difference between informing and forming a kid. The digital instrument, which never misses anything and is always spot on, is just fine to inform. But we must form and, to do so, the set-up followed up to now is still valid. Teachers must be formed by the Ministry not by us, even if a great part of their training also comes from what the publishers provide. Digital has to be there, but it is advisable to also find the time to let the knowledge deposit. At the last Salone del libro (book fair) there were three primary and secondary classes in the conference. A neuroscientist was stating that a page of a book, in its being limited, allowed to get a higher perception of the text despite the fact that kids preferred to study on tablets. I was heartened by the rebellion that I saw in those kids who loudly declared to prefer books to tablets for studying. The idea that kids are willing to do everything with their phones and similar is quite sketchy. Only a right effort is necessary to ensure that there is a healthy balance between what a kid will do on a book in a class, at the blackboard, and what they will do with their computer, telephone or iPad.

Inclusive teaching: at what point are we in Italy?

We are talking about an element of civilization, because it is capable of emphasising on specificity and because it does not exclude anyone. Sei Editrice decided many years ago to take responsibility for these issues, starting from verification tests on basic textbooks and dedicated textbooks. The commitment in the course of the years has been considerable, both in textbooks and in digital, by making our books highly readable, but not only.

Dyslexia and EasyReading… how did you get here?

Rumours spread fast in the publishing world. I came to know of their existence from friends in common. That’s where the first meeting originated, and, once we found the useful setting of their font, we could do nothing else but adopt it. We perceived in them a desire to continue to work on it, they did not want to give us something as a one-off, and they wanted to continue their studies, refine the uses. That is why I expect a new version at any time.

For which of your publications do you use the inclusive font?

For all of them. Every book, if not in its entirety, has parts in EasyReading, and starting from this year, in addition to being used as font for textbooks of the primary and secondary school, it will also be used for the three years of the secondary high school.

What is your direction going to be in the near future?

We will try to be true to our mission, as the kids would say. We want to provide professors and students with tools that work. Our care will to maintain the necessary divergence we have in these cases, because the tool, be it digital or on paper, must be useful both for teaching and for learning. The two components need to be held together in harmony: this is what we will continue to do in the years to come.

Trade Fairs. Where will we find you?

Our internal policy leads us to use the time that we spend at trade fairs for the benefit of schools. It is there that we keep our refresher courses, it is there that our authors introduce their works. The relationship that the publishing house establishes with its counterpart is B2B (Business-to-business), that is why we prefer to talk directly to teachers. Bologna? The pavilion dedicated to the school sector no longer exists, that is why we do not take part in it any more. Turin? We are giving it a thought.