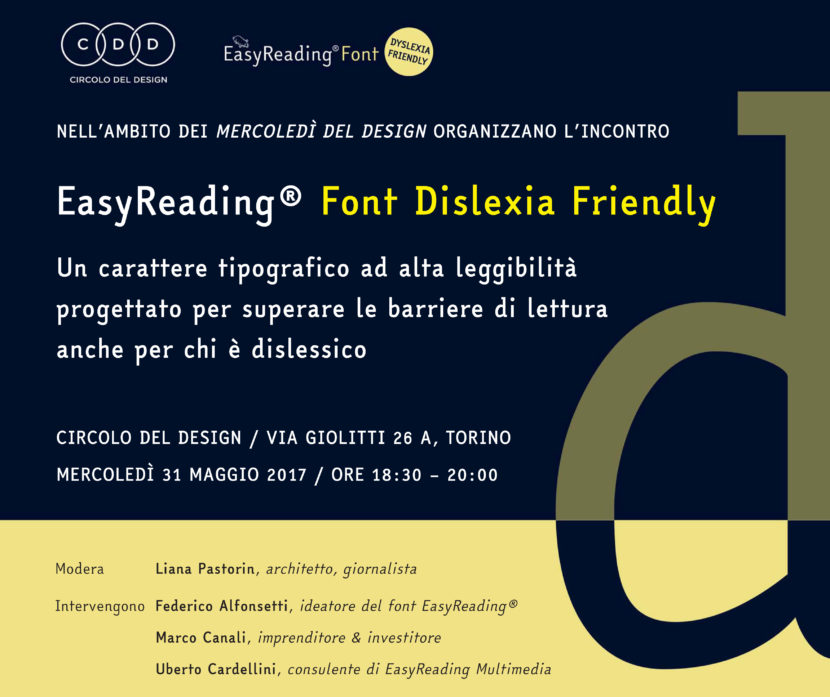 WITHIN THE DESIGN WEDNESDAYS WILL BE HOLDING THE TALK

It was born from the idea of facilitating readers with dyslexia, and all other categories of readers, to help them decipher the written word in a fluid and immediate way with a high-readability typographic character.

The philosopher Watzlawick reminds us that it is impossible not to communicate but in order to communicate it is not enough to use the right words, we must also make the readers recall different emotions. That is why the readability of words goes hand in hand with how much they can communicate and convey.

The inspirational principles chosen were those of Maestro Bruno Munari: Creativity of reason. To overcome the pure self-referential stylistic exercise based on the ancient concepts of beauty and ugliness, and what is right or wrong, to achieve logical and aesthetic solutions.

The font was implemented with the Design for All (Universal design) methodological approach according to which diversity is conceived not as a problem but as a facilitating “value”. To therefore provide an inclusive and non-exclusive response: a single solution to multiple problems.

Internationally, EasyReading® is the only font explicitly “dedicated” to dyslexic readers which, subjected to an autonomous and independent scientific research carried out by Dr Christina Bachmann (a clinical psychologist and psychotherapist) on the degree of legibility, has achieved positive results:

“The EasyReading® font may be considered as a valid compensatory tool for readers with dyslexia and at the same time a facilitating font for all types of readers”.

EasyReading® has received a positive opinion from the Italian Dyslexia Association (AID) for its specific graphical features that facilitate reading by those with Dyslexia problems.

The font was also granted incentives for the economic valorisation of its innovative industrial design by the Ministry of Economic Development through the Fondazione Valore Italia – the Permanent Exhibition of Made in Italy and Italian design.

According to the latest estimates, dyslexia currently affects at least 10% of the world’s population, i.e. approx. 700 million people. Hence the need to create a font that might be for everyone. The EasyReading Multimedia company deals with the font’s marketing at an international level.

The EasyReading font currently consists of 811 glyphs (letters, numbers, accents, symbols, punctuation), including 6 styles and is so comprehensive that it can cover the alphabet of all languages that use Latin characters. The Cyrillic alphabet of the EasyReading® font is currently being created and the Greek alphabet is in the study phase.