Internationally, EasyReading is the only font explicitly “dedicated” to dyslexic readers which, subjected to autonomous and independent scientific researches on the degree of legibility, has achieved positive results.

The study “Can a font be considered a compensating tool for readers with dyslexia?”, by Christina Bachmann, clinical psychologist and psychotherapist at Centro Risorse, Clinica Formazione e Intervento in Psicologia, Prato, Italy, conducted on a large representative sample (533 fourth grade children, including normotypical and dyslexic readers), concluded that:

“The results, which appear significant from both the statistical as well as clinical point of view, allow us to affirm that EasyReading can be considered a valid compensatory tool for readers with dyslexia and a facilitating font for all categories of readers”.

The research was published in the scientific journal “Dyslexia. Italian Journal of clinical and applied research” (no. 2/2013), Published by Centro Studi Erickson, Trento. 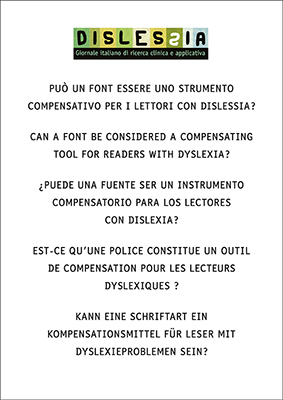 In May 2018, the 14th, Psy. Christina Bachmann and Psy. Lauro Mengheri published in english a new revised analysis on the matter: “Dyslexia and Fonts: Is a Specific Font Useful?”, In this paper they concluded that: “The clinical improvement resulting from EasyReading is so consistent as to overtake the natural reading improvement in a year, thus proving that EasyReading makes reading easier. This provides the opportunity for dyslexic students to partially fill the gap between their reading fluency and that of their classmates, just by using this font” and that “Finally as the reading fluency and accuracy improvements were appreciable across all groups (normal readers, readers with difficulties, dyslexics and students with cognitive difficulties), EasyReading should be considered an important aid for all students”. 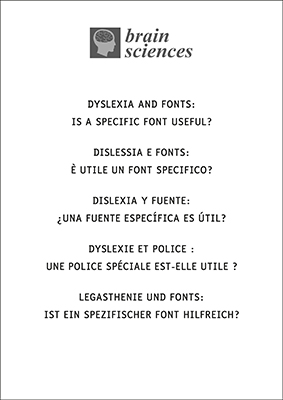