There is a publishing house in Rome, Carlo Gallucci Editore, publishing books designed by authors, artists and musicians for children, kids and youth. The success it got has been achieved in a few years thanks to its funny, colored and illustrated books. Our font has been adopted by the publishing house for a little over a year for some of its series in catalogue: Stelle Polari (Polar Stars), Frida Miao e Grandi Storie Horror (Great Horror Stories). We delved into the latter and the reason why they choose to adopt our font with the company’s narrative consultant Cristina Vernizzi.

The Stelle Polari (Polar Stars) series aims to revisiting classics to make them accessible to the younger age group. Why did you choose to do it in this key?

Children at 6-7 are very open, curious and receptive. Precisely for this reason we felt that it was the right time to let them know the great stories of literature for children, and not only. The classics tell powerful stories, which have involved generations of young people in, and are able to compete with the compelling narratives of the big and small screen, as well as video games. The goal is to thrill children and motivate them to read the works in full a few years later.

How did you select them?

First of all, we wanted to propose some great literature classics for children, partly neglected by publishing houses in recent years, again. The selection focused on works telling adventures, like Dickens’ Capitani coraggiosi (Brave Captains), or on feelings, like Sand’s La piccola Fadette (Little Fadette), which together are great educational novels, but it also includes an adult fairy tale like Orwell’s La fattoria degli animali (Animal Farm) which deals with such important topics as freedom and equality. We then paid attention to gender preferences, balancing works attracting more male audiences, such as Capitani coraggiosi (Brave Captains) and Ben Hur, and works which girls like best, such as La piccola Fadette (Little Fadette) and Cosetta, including stories seeing the animals as protagonists or co-stars – essential in this age group – such as Tarzan delle scimmie (Tarzan of the Monkeys) and La fattoria degli animali and (The Farm of Animals).

How does the reinterpretation of a classic happen? Could you tell us the steps?

By proposing the great classics of children’s literature in first readings format we decided neither the lessen of the original text nor its rewriting, but rather we chose its stylization: the fundamental plots are being told, leaving the secondary episodes out, and the attention is focused on the protagonist and its evolution throughout the story. We asked the illustrators to comply strictly with the author descriptions by providing them with useful excerpts from the original work. Finally, since we did not want to turn down dialogues, which “warm up” the story and thrill the reader, we decided to introduce also some characters’ basic lines taken from the original text. We did this through comics, to ease children who just learned to read in capital letters, when, in the first class of primary school, the punctuation marks delimiting direct speech have not yet been introduced.

Which new classics are you planning to include in the series?

In January 2021, Alphonse Daudet’s Tartarino di Tarascona (Tartarino of Tarascona), an adventure book which is also a classic of humor, and Oscar Wilde’s Gigante egoista (Selfish Giant), a fairy tale with an important opening message at a time when walls are raised to mark the borders, will be released.

On August 2nd, the first two episodes of Frida Miao came out. Who is the protagonist and which setting have the stories?

Frida Miao, the protagonist of the series, lives in a family of mom, dad and a little girl named Susanna. She is a cat with a rebel and unpredictable nature, which does not let herself get easily pushed around, to the point that she becomes even wicked when she disagrees with what her family wants her to do. She is also generous, has a big heart and instinctively knows how to help those in difficulty. A character, therefore, which arouses the fondness and identification of small readers.

Even in this moment you handled the translation. What was the original language? Have the plots of the texts been changed?

Texts have been translated from French and plots have not been changed. The problem of translation of these books was not about cultural adaptation, but linguistic rendering, because Frida has a very colorful language, sometimes provocative, full of rhymes, assonances and linguistic games. In the transition from one language to another it was necessary not only to return the words and meanings of the original text, but also to render a rhythm and a phonic fabric of rhymes, alliterations and assonances, without slipping into the nursery rhyme.

Are there any other releases of the same series scheduled?

Yes, we will be releasing two new publications in March 2021. 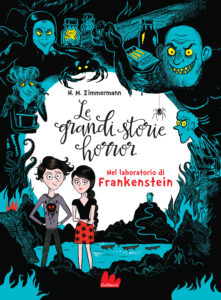 Another series, which reached four publications in August, is Grandi Storie Horror (Great Horror Stories). Did you take the idea of adapting a genre traditionally not for children to this target from other similar successes?

Horror has been proposed in a style suitable for children from 8 years and up for many years and is a genre appealing very much to young readers. There is a new idea at the base of this series translated from the French: the protagonist, a fear stories enthusiast, finds himself pitched into the imaginary worlds of the great horror classics, by leafing through the pages of a book that works as a portal. Thanks to this perspective, small readers can also get in touch with the characters and stories of adult horror literature.

What feedback are they getting?

The feedback is good. They are titles which are being constantly selling, even months later their release in libraries.

Is it a genre which intrigues young readers?

Much. Children are attracted to the thrill these stories arouse and, just because they fully enter through imagination into fiction, sometimes they really feel a little fear. As I said before, it is a genre which is not being proposed before the age of 8, but precisely for this reason 8-year-olds children often get horror books read by their mom or dad.

When did you start your working cooperation with EasyReading?

We started it precisely because of the publication of the series Grandi Storie Horror (Great Horror Stories) and Stelle Polari (Polar Stars), in summer 2019.

Why did you feel the need to do it?

Composing the text of the series dedicated to the great classics of literature in EasyReading means allowing the fruition of important written works for our culture to all girls and guys, including those who have special educational needs.

o you use it in all your publications o is this a goal you aim to?

No, it is not being used for all our publications. In our catalogue there are books where it is neither functional nor possible to use EasyReading within, for example those for the 0-5 group, where it is the parent reading aloud the text or child having a sensory use of it. There are also illustrated books we produce in co-production it would be impossible to use the font within because limited space or a colored background is provided for the text. We decided to use EasyReading in all our series of first readings for 6-7 years, just to facilitate children who have just learned to read.