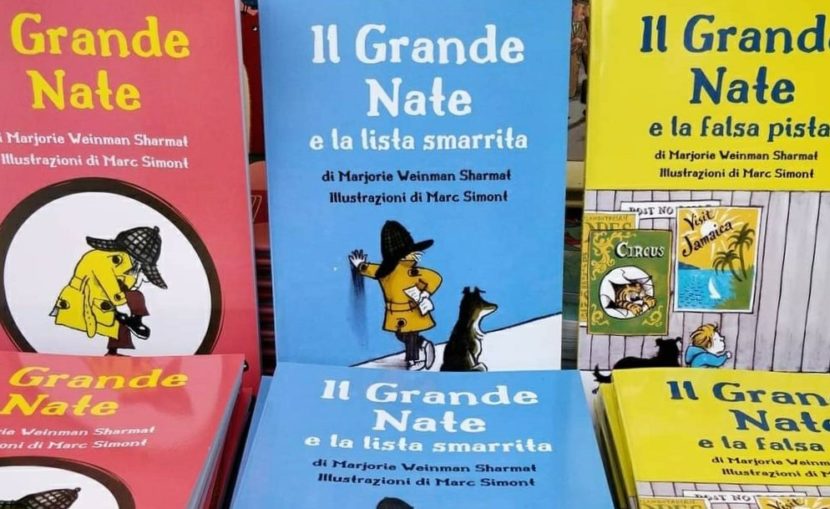 An independent publishing house creating books and games to get adults and children closer was born in Rome in 2012. Il Barbagianni Editore is its name and all its products are made in Italy, by expert artisans, with high quality raw materials. Its catalogue contains illustrated books, card games, game books and educational books. Among the series which drew the most attention in the last period there is “Il Grande Nate” (The Great Nate), a series of crime novels written by Marjorje Weinman Sharmat and illustrated by Marc Simont, that, through its mysteries to be solved, has brought generations of children closer to reading in USA, selling 15 million copies there. The first two books of the series have been in bookstore since June and the third “Il Grande Nate e la falsa pista” (The Great Nate and the false lead) will be available from mid-October. To learn more about the origin of the series and the plots of the single releases, we decided to interview the publisher Jacopo Saraceni.

Why is that you decided to bring your series to Italy?

That is the result of a long research and selection we steadily make in the publishing house. This series has drawn our attention for the ease with which reconciles adults and children. Nate, our protagonist, has a peculiar way of taking his “work” seriously and this trait, always in a sarcastic way, affects the youngest and amazes the adults. In addition, “Il Grande Nate” (The Great Nate) is a series dedicated to promoting autonomous reading among primary school’s children by offering them plots and storylines with a drama construction worthy of a book for adults. This and other aspects make the series still deeply relevant even if many years have gone by since its first release.

Why did you make this choice just now?

No one has seemingly spotted Nate before us or, who did it, has ever considered it a series to focus on. We, from our side, decided to gamble on that the time to make its debut had come in our country too.

In the first book of the series, Il Grande Nate (The Great Nate), the little detective with a great instinct has to find the painting of Annie, a friend of him. What is the context the events are taking place in and what are the highlights?

The episode takes place as usual in the district where Nate lives. The detective, once decided to treat the case, mainly investigates at the “crime” scene, by observing, questioning and drawing his conclusions. What will be crucial are the sense of observation and the following reflection… in front of a dish of his beloved pancakes!

The second book, “Il Grande Nate e la lista smarrita” (The Great Nate and the Lost List), sees our hero at the center of the episode focused on the search of the shopping list entrusted to him. What role will the pancakes insanely loved by Nate play in the episode?

In the series the pancakes are “catch phrases” which always turn out to be funny. Let us just say that here, in particular, Nate will have to use all his 5 senses…actually 6.

When can we expect the release of the next book of the series: “Il Grande Nate e la falsa pista” (The Great Nate and the false lead)? What will be the development of the episode?

It will come out shortly, on October 15. A challenge to his detective skills issued by bullies will be accepted by Nate who will prosecute a case made even more complex by his opponents’ dirty play.

For “Il Grande Nate” (The great Nate) series you chose a font, EasyReading, able to help even the reading of dyslexics. Where did you get your inspiration from?

Whenever we bring a foreign product to Italy, we focus on adapting it to the market in a constructive manner. This kind of approach goes beyond the book’s format, graphics or cover. We are actively involved in the work’s adaptation, side by side with translators, and we try to catch the more significative aspects for the Italian audience. Concerning high readability, we wanted to add value to the native vocation of this series which is to get primary school children closer to reading. Through EasyReading we achieved the double result of strengthening this aspect by innovating it with an inclusive component that, about 40 years ago, simply did not exist.

As publishing house, that is a decision you already made in the past for other books?

That is the first time we have ever used a dyslexia friendly font. However, after “Il Grande Nate” (The great Nate) we used it for another work – not for sale but meant for the public – and it was deeply appreciated.

How are you planning to handle this subject in the future?

We have been considering using this instrument whenever there is no real obstacles or incompatibility of an artistic type.